Corruptions at the Philippine Education Department 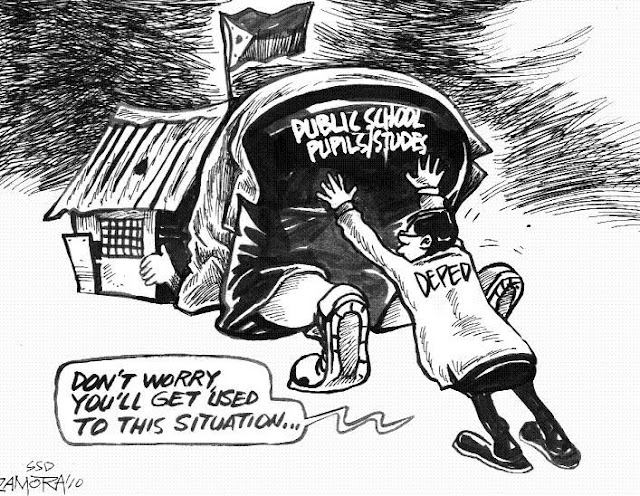 By Mortz C. Ortigoza
This is a story told to me by a public school teacher. This story can be better re-told in the vernacular:
Girl: Manong Bayad (Big brother, my jeepney fare)
Driver: Saan galing? (Where did you come from?)
Girl: Student, Nursing, St. Paul, bagung sakay (I just rode your jeep).
Boy: (Affronted by the air of the girl, paid P500)
Manong Bayad (Big brother, my fare)
Driver

Angry) Ilan sa P500? (How many passengers for the P500?)!
Boy: Isa lang, Kip d change, seaman, bagong baba! (Only one, but you keep the change of my money, . I am a seaman who just disembarked from my ship).
Woman: (Feeling affronted by the arrogance of the boy, paid P1000!) Bayad, paki-abot! (My fare, please give to the driver).
Driver: Anak ng … Wala bang barya? (Son of Bi___, you don’t have loose change?)
Woman: Sa inyo na lang iyung sukli manong, teacher po bagong loan!
(The loose change yours, Mr. Driver. I am a public school teacher. I just received my loan.)
***
Why do some lending institutions that cater to teachers thrive at the Department of Education?
They are in cahoots with the public school’s Regional Director and the paymaster.
A lowest ranked teacher who receives P18 thousand a month but who borrows P50 thousand has to pay it for two years in a monthly amortization of P 2,521 -inclusive of the P438 interest- a month
He/she would find himself/herself receiving a monthly check of P15, 479. The same situation if he/she borrows using the P15, 479.
It’s a windfall for these lucky-as-Lotto-winner financial institutions that earned up to 21.024% interest for a P50 thousand loan.
Interest per month is efficiently collected because somebody in the regional office like the laughing- to –the- bank regional director, and other conspiring bigwig-malefactors give the imprimatur to the paymaster to deduct the loan payment before they would be released to the provinces.
***
Why are some public school supervisors and principals bullish every graduation day?
Because they get a financial cut from every rented toga and cap, and graduation picture from the captive impoverished parents and students who join the commencement exercise in the kindergarten, elementary, and high school levels.
A toga and cap for a graduate in the three levels are rented for P40. But unwitting graduate and parent do not know about the fast one done to them after they paid P100 for the package, as corrupt school officials pocketed P60 from each of the graduates.
“Sometime it is the principal only who pockets the overprice,” my source told me.
It is the same situation with those graft-ridden pictures that cost P100 for each graduate.
“The jacked-up price reached up to P25, where the student pays P125,” my source told me.
****
A former implementer of government-owned Land Bank of the Philippines told me he has read my “How Philippine officials pocketed some loans from gov’t banks” in my Blog that saw some thousands of hits,ahem, already because of the “intrigued” I sowed.
He said that mayors and councilors could easily pocket some portions of the loan, say P7 million for the P50 million loan vis-à-vis the “progress-building” policy of the LBP of how much loan it releases to its funded town hall , market building, and other public infrastructure.
He said progress building means LBP inspector go to the work site and check how much of the building is finished as based on the cost of the loan before the bank releases the money.
“Usually the cost of the project is jacked-up by those municipal officials,”
He said these officials already earned from the cut the mayor’s gave them.
He told me officials of the LBP do not check the priced-up invoices of the materials as it is the work of Commission of Audit.
He said some mayors use dummy to construct a municipal project.
He said aside from the portion of the loan illegally pocketed by the mayor, he gets another 10% from the Overhead Contingency not to mention his 10% as Contractor’s Profit .All of these percentages are sanctioned by law.
( You can send comments at totomortz@yahoo.com)
Ipinaskil ni Mortz Ortigoza sa 11:55 PM Walang komento: