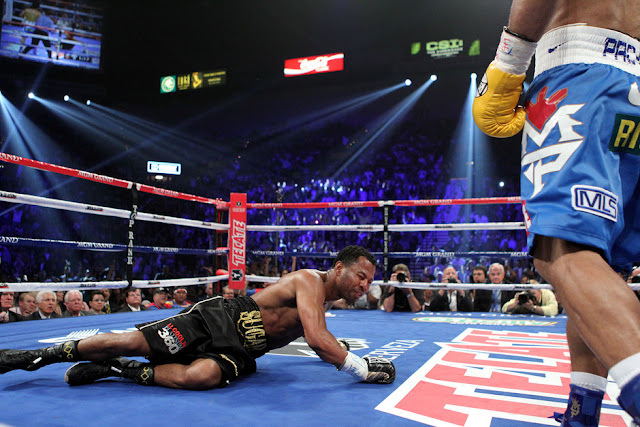 by Mortz C. Ortigoza
"Pacquiao emulates Southpaw Winky Wright who defeated Mosley twice. Sand bagged with the gloves and steamroller Mosley with those lethal left and right hooks"
This tiff is the toughest Filipino pug Manny Pacquaio faces in May, 7, 2011.
But explosive Manny is a 6-1 favorite as the fight nears
Aside from the ear-drum beating “punishment” pop music buffs all over the world have endured to this Justin Bieber-Bruce Lee’s look a-like newly released rendition of Dan Hill’s “Sometimes When We Torch, er,Touch”, can he also punished Mosley the way he bludgeoned awkward- moving- slow punching Antonio Margarito on this awaited tiff?
The following assessment could probably answer our question:

Advantages of Mosley against Pacquiao
-Bigger, stronger, and most dangerous opponent who has been put in front of Manny by BobFather Arum;
-Has 72.22% Knocked-Out ratio in his 54 fights against Manny’s 66.67% KO in his 57 tussles;
- Although paces like a duck in the ring, he is not a sitting duck as he has an excellent slick lateral foot movement. He could dart in-and-out the way he victoriously did to Oscar dela Hoya in their two epic battles in the early 2000s when the Golden boy was at his peak;
-Has an unpredictable left jab he converts to power left hook that either TKO or KO Fernando Vargas, Ricardo Mayorga, and Antonio Margarito;
-Has looping right hook he converts to the Beatles’ bang-bang “Maxwell Silver Hammer” that nearly knock down Floyd Mayweather in their 2nd Round outing and zapped-out the durability out of Margarito’s chin;
- Has a chin as thick as the callousness on the faces of Filipino government officials who malversed scarce public funds just to watch solon Pacquiao in Vegas;
-Never experienced how to be in the dreamland on the dais unlike Manny who experienced how it felt to be KO or TKO thrice at the platform.

Advantages of Pacquiao against Mosley
- Every time he fights, survivors of Nagasaki atomic bombed blast are either traumatized or have nightmare as they remembered how that more than four tons “Fat Man" bomb born by a B-29 bomber wrought havoc to them in that fateful August of 1945.
-His hands speed would look Jason Statham knife-stabbing prowess a child’s play in the flick “Expendable”.
-You ask Democrats Senator Harry Reid of Nevada how violently explosive Congressman Pacquiao is?

What Mosley should do in this fight?
-As he backpedals as Manny chases him, he fires his Hellfire missile-likes right or left hook to the Filipino’s chin;
-He should always raise his right or left lower arm to deflect Manny left or right hook before he counters him;
- Incessantly left jabs Manny’s face and moves clock-wise to frustrate Pacquiao’s setting his lethal left cross and hook;
-He shot a power left hook or cross at Manny’s right chin as the latter has the propensity to lower his right hand;
-Fire 1-2 combination to Manny and then clinch or crowd him to prevent his hay maker. If fellow African-American Bernard Hopkin can do this with gusto by defeating his difficult foes, why not Shane to Manny ;
- After he hits the left face of Manny with his signature flush looping right hand, follow it up with power left upper cut or left hook;
- Hit Pacquiao with a right hook then immediately bend and weave his head to his right to avoid Manny’s dangerous counter left hook. He can back pedal, too, to frustrate the Filipino in hitting him;
- In a clinch position, he can sneak a right hook to Manny’s chin;
- After Manny lower his hand to pause, Mosley attacks him;
- He moved laterally to the right or left by complementing it with sneaky right stiff jabs. Then set and fired that killing right overhand hook;
- Body punch Manny

What Pacquiao should do in this fight?
-Make Shane busy the entire round. He tired and decreased the rates of his punches in the second half as shown in his fight with Miguel Cotto and Mayweather;
- Shane’s propensity to double left jabs only makes him open to Pacquiao's flushing signature hit left hook to the chin of the Pomona, California native;
- Emulates Mayweather who waited for Mosley’s left jab by either blocking it or bobbling his head, then counter it with a power left cross at Shane’s right face;
- After Shane’s launched his right cross, Manny backtracks just like Mayweather to avoid being hit from that right hand and Mosley’s smoking left hook;
-Mosley has difficulty setting his bunches of punches after an out-of- angle flurries Mayorga’s brought to him;
-He emulates Southpaw Winky Wright who defeated Mosley twice. Sand bagged with the gloves and steamroller Mosley with those lethal left and right hooks;
- Just like in dela Hoya and Margarito’s fights,Manny stick, slip-out and throw punches again before Mosley is able to regain his defense;
-- After Shane’s lower his hand to pause, Pacquiao attacks him just like what Mayweather has effectively done;
- Manny treats Shane with a 1-2 body combo, and 1-2 chin combo. Just like the oil riched Philippine claimed Spratly –Islands, Mosley’s body remains unexplored to hard drilling.The late VernonForrest, who floored him twice, and defeated him twice, showed that Mosley is vulnerable to a body assault. “Nobody ever went to Shane’s body before because they were intimidated by his hand-speed,” said Forrest’s trainer Ronnie Shields.

Every time Mosley fires his left jabs, Manny preemptively unleash his left whack-whack guns that has damaged Morales and Cotto, Mosley is hittable at his right face as he sets his right hand;

-As Shane’s stick and dance, Pacman attacks as if there is no tomorrow.Forrest showed that a flat-footed moving Mosley is vulnerable to a determined attacker;
- Mosley is vulnerable with left hook as he lowered his guard to his right chin;
- Watch Mosley’s upper cut as he fired it, then he pauses or backpedal. That’s the time Manny lunged a right straight or fires his right hook;
-Manny should see to it that a disturbed Mosley could not set an angle to unleash his signature right hand;