A voter in one of the cities in Pangasinan province could not believe that during election day and the day after fast food chains like those internationally franchised Jollibee and McDonald and appliance centers had been flooded with enthusiastic customers.
“First time ganito ka dami pila ng tao na mukhang madami galing sa squatter areas.
P5,500 richers itong mga siste. Madami sila pera today,” cited by Butch Tolentino to those high spirited folks who queued in those franchised stores.

Pakurong is Pangasinan term for dole outs in cash or in kind that candidates give to voters surreptitiously in the eve of election day.
Each of the rivals for the mayorship derby gave P2,500 and P3,000 each to the delighted voters who were seen at the streets in late night of May 12 and wee hours before the May 13 election day waiting for the signal to claim their thousands of pesos through a security featured stub given by the bagmen of the candidate who wielded an ultra violet light (UVL) that checked their authenticity.
Magbasa nang higit pa »
Ipinaskil ni Mortz Ortigoza sa 7:05 PM Walang komento:

He Still Wins Despite Non-Backing from INC


When a central Pangasinan mayor learned that the 3,500 members of the bloc voting religion’s Iglesia ni Cristo (INC) in his first class town will be voting for his rival in the mayoralty race which he tangled for the third time he rushed to the bank and withdrew P21 million he would use to vote buy.
“Biyernes noong malaman ko na ang Iglesia doon boboto sa kalaban ko. Ang election sa susunod na Lunes. Binaha ko ng P300 ang kada botante ng Biyernes, Sabado, at Linggo ang bayan at mga barangay,” he referred to probably 40,000 voters in the 2013 mayoralty election.

The rule of the thumb in the Philippines is 75% of the voters vote. So he exploited the mostly gullible, naïve, and poor 30, 000 electorates.
“You have to buy 20, 000 of the voters to win,” he told me.
Magbasa nang higit pa »
Ipinaskil ni Mortz Ortigoza sa 7:02 PM Walang komento:

The challenger was unfazed by the size of the political machine and the black propaganda resorted by the supporters of the electoral titan and still beat him in the congressional derby.
“I just backed up my campaign with positive campaigning. I was never affected by the negative propapaganda, the poison letter, the black propaganda. I never smeared sinisiraan ang aking opponent. So it’s just a positive way of campaigning,” Binalonan exiting mayor Ramon “Monmon” Guico, III cited his victory against Pangasinan Fifth District Congressman Amado T. Espino, Jr. after he was proclaimed Tuesday by the Provincial Board of Canvassers of the Commission on Election (Comelec) at the Sangguniang Panlalawigan in Lingayen town. 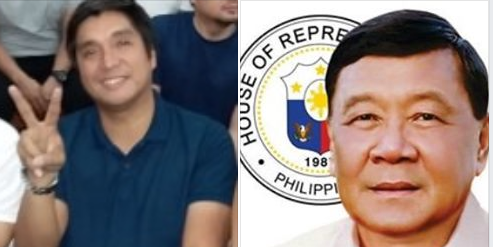 VICTORY JOE – Exiting Binalonan Mayor Ramon “Monmon” Guico, III flashes the Victory Sign before his proclamation by the Provincial Board of Canvassers of the Commission on Election at the Capitol in Lingayen town. Guico trounced out incumbent Pangasinan Fifth District Congressman Amado T. Espino, Jr in the May 13 election. That defeat was considered an upset in the mammoth province’s politics as Espino was considered as Pound-for-Pound marquee politician. Photo by Mortz C. Ortigoza

Espino was considered as an astute marquee politician who vanquished the province’s political elites in the gubernatorial races like the spouses Jamie and and nine years governor  Victor Agbayani, and former congressman Hernani Braganza, and congressional race rival the then incumbent 5th District Representative Kimi Cojuangco.
“The guy was politically invincible who kept winning elections until Binalonan Mayor Monmon drew sword with him,” a pundit, who asked for anonymity, said. “
“He was once like Greek mythology's King Midas. Everything he touched turn into gold,” he added.
Magbasa nang higit pa »
Ipinaskil ni Mortz Ortigoza sa 6:53 PM Walang komento:

One of the mayoralty bets at a town in Pangasinan used a ticket stub with a security feature to avoid its fabrication by his opponent that could sabotage his electoral stocks.
The two inches by two inches’ stub has a combination of blue, green, and brown stripes, a bar code, and the name of the voter taken from the master's list of the Commission on Election.
The security men of the candidate who checked the queue of roughly three thousand voters in a village at the main entrance of huge warehouse used ultra violet light (UVL) scanner to check their authenticity.

“The light of the pen determines if this is not fake if there is a brown square that will appear when the light hits the blue and green stripes,” a portly security aide of the re-elective mayor explained the tiny square that appeared at the blue stripe of the stub.

Among the voters, who composed most of the electorates in a village, who would be receiving P1,500 to vote for a mayor, vice mayor, and the congressman were 30 men and women caught possessing the fake stubs.
“Nanggaling pa iyan sila sa karatig bayan,” another supporter of the mayor butted - in when someone asked where these people came from.
The aide could not determine if those spurious stubs were commissioned by the rival candidate to wreak havoc to their bribery attempt or they were just enterprising individuals who copied the ticket after the leader of the candidate distributed them around the village a day before.