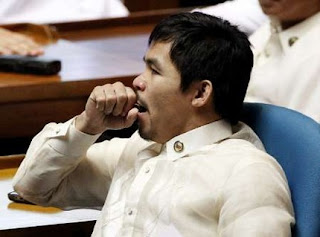 By Mortz C. Ortigoza
Media colleagues in Dagupan City who covered the training of pound-for-pound king Manny Pacquiao in nearby Baguio City told me their stalking experiences before he goes to jog and train.
With national and local media men shoving and jostling to take a peek in a place outside the entrance of the Cooyeesan Hotel on who among them see first the convoy that includes a black SUV and a gold van of the Filipino superman that would emerge from the hotel’s car park.
As they scamper to their vehicles to give chase to the convoy’s  whose speed could be mistaken to ferry VIPs  like US Ambassador Harry Thomas (who looks like Light Heavyweight boxer James “Fat Man” Toney)” being rushed to Baguio General Hospital because of a vowel disorder, they would later found out that the SUV and the van turtle paced as they patiently followed Manny and his company who jog the hills and valleys of the cloud kissed Pines City.

‘So what intrigue you is the convoy could not overtake the speed of Manny and his company as they hit the road?,” I posed to  this pal who accidentally became a media man after he ran an errand to buy Datu Puti Vinegar and return home as newly minted member of the Fourth Estate in my city dubbed as the Bangus (Milkfish) Capital of the World.
“No my man, what intrigue me those dudes were being followed by an SUV with a plate number 8. What I know is a car plate in the Philippines is marked by three letters and three numbers, what this No. 8? “He posed to me wide-eyed.
“My man, you’re a nincompoop! Plate no. 8 is used by members of the House of Thieves, er, Representatives or congressmen in our country. We call it as protocol plate. It is issued for people to recognize important government functionaries".
According to a bigwig of the land transportation office, these plates are so sacred that it is No. 8 below in rank after Jesus Christ. President of the Philippines uses No. 1, Senators use No. 7, and Judges of the Regional Trial Court use No.16.
"Some of these luminaries abuse these by whimsically cutting a two way lanes, and sometime overran anti-Pacquiao critics like you," I lectured my media pal over mugs of San Miguel draft beer at Shakey’s CSI Warehouse in Dagupan – the favourite hang-out of prolific boxing scribe Hermie Rivera.
My now bewildered but enlightened pal still wondered why Pacquiao used it to jog and not uses it to attend his duty as congressman at the August Chamber in Manila.
He wondered why the almost 283-strong members of the House used their plate numbered 8 SUVs as vehicles so they could vote recently for the Article of Impeachment of an allegedly corrupt and incompetent Ombudsperson (government chief prosecutor) who was identified with the likewise alleged corrupt former president Gloria Arroyo, while Manny used his plate numbered 8 SUV to relax at some coffee houses at either SM Mall or Camp John Hay while Congress (a four-hour drive only to his place in Baguio) was in session up to the wee hours during that time?
He poses to me: “Would the Filipino superman still uses the same plate numbered big car to drink coffee, while his colleague vote in favour or against anytime from now to a Reproductive Health (RH) Bill  that could solve or aggravate the gnawing hardships our people suffer to our population that breed like rabbits?
“But Manny was against condom and other contraceptives. He even quoted the Lord’s edict in the Bible to go and multiply?” I asked him.
“Would it be commonsensical and popular for the part of the pro-RH bill that Manny rides in his number 8 SUV and just drink coffee till Kingdom Come at some coffee houses there instead of casting his “No” vote in congress,” he retorted to my question with a query.
I told him that I could forgive Manny for that! But no Twitter for him, please!
(Send comments to totomortz@yahoo.com)


THE OVER ABUSED PROTOCOL PLATE. This is sample of a Philippine congressman's SUV with plate number 8. SUV like this sometimes lorded the city streets of the Philippines by crossing the flow of traffic with its own sirens,  armed body guards inside it, and its convoy of cars.
A moneyed "idiot" in the Philippines can win an election despite his low education or low intelligence like Senators Lito Lapid and Bong Revilla and the soon to be Senator Manny Pacquiao. The Philippine Constitution only asks that one of the few qualifications of a Philippine congressman is he/she knows how to read and write in English or the vernacular of his/her tribe. One's employment for clerkship in a government office in the Philippines is more intricate as the applicant needs to wave a college diploma and passed a barrage of tests that includes the tough Civil Service Examination that was bequeathed to the country by her American colonizers in the 1900s.
Ipinaskil ni Mortz Ortigoza sa 8:58 PM 2 komento: