Lessons Filipinos could learn from the US election 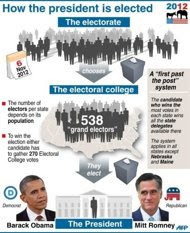 Even the U.S and the Philippines are representative democracy where the voters directly elect their president, the US differs from the Philippines in the mode of electing its highest leader. Filipinos elect directly their president and their vice president, the Americans only elect directly their president and whoever wins the presidency he gets his chosen vice president. If Democrats’ Barrack Obama wins in November 6,2012, he gets Vice President Joe Biden. If Republican or GOP’s Mitt Romney’s wins he gets Congressman Paul Ryan. If President Noynoy Aquino got 500 thousand votes in Pangasinan and 250 thousand votes in South Cotabato all of them including the votes he got in other local government units (towns, cities, provinces) in the country would be tallied and if he got the highest votes say 15,208,678 from the more than 50 million registered voters he wins the election.
If Barrack Obama got 50.1% votes versus Romney’s 49.9 votes in the State of California and 55 % versus Romney’s 45% in the State of New York, the Office of the Federal Register at the National Archives and Records Administration, US version’s of our Commission on Election, do not add all the votes the way the Comelec has done to Presidential candidate Aquino.
California is represented by 55 electors or Electoral College votes while New York is represented by 29 electors that would go all to Obama in a winner-takes-all rule (55 plus 29 equals 84). In the U.S ,a presidential candidate needs to win 270 electors in all 48 States and the District of Columbia to become a president.
The States of Nebraska and Main however do not practice this winner-take-all as they have another formula in computing who wins in their States.
The distribution of electors, by the way, is based on the number of congressmen and senators in a state. Members of the Electoral College are chosen by the state.
There are five presidential candidates running for the highest office in the US now. Obama, Romney, and third parties candidates (although they are spent force), Libertarian Gary Johnson, Green Party candidate Jill Stein, and Birthday Party (Is he an independent?) Richard Duncan.
Moreover, Electoral College does not mean that the winner got most of the popular votes (A hypothetical 51 million votes versus 50 million voter for his rival). When George Bush, Jr. defeated Al Gore for the presidency in 2000, the latter got most of the popular votes but lost in the Electoral College against Bush, Jr.

***
As of press time (Sunday, November 4 Philippine's timeline) and two days to go before the U.S presidential election Democrats presidential candidate Barrack Obama is tied by 49 percent each with Republican presidential bet Mitt Romney according to the Rasmussen Poll.
Before Super Storm Sandy crashed on the East Coast, Romney has a two-point lead against the incumbent president.
How did the Democrats change the face of the race that once favored Romney to become the next elected president after the November 2012 election? According to Republican poll strategist (political operators in the Philippines listen!) Dick Morris who heads, together with Mike Reagan, the son of former president Ronald Reagan), the GOP’ soliciting body Super PAC, Obama Team outspent the Romney’s team in funding negative TV ads against the latter by millions of dollars on swing States like Ohio and Wisconsin. According to Morris: “Pennsylvania, Romney led on Wednesday night by two points but in Thursday night’s polling, he was tied.” We have also seen slippage for Romney in Michigan. More troubling, Rasmussen shows a two-point gain for Obama in job approval, rising from 48% to 50% in the current poll. All of these changes are, no doubt, related to Hurricane Sandy.

** *
The lessons we Filipinos could learn on this TV ad thing (either be it in the gubernatorial poll or senatorial poll in the May 2013 election) is it is a major factor in winning the election. TV (like ABS-CBN, GMA-7, and TV-5) penetrates all sectors of the society from the cross stitching grandma to the basketball buff grandson who is already eligible to vote.
The only problem in the Philippine is most of our politicians don’t exploit the defects of their opponents on their paid ads on TV (or count here too the AM and FM bands on radio, and the cheaper “White Paper” circulated by politicians in exposing the weaknesses of their opponent).
Despite being embodied in Section 79 of the Omnibus Election Code that says"election campaign" or "partisan political activity" refers to an act designed to promote the election or defeat of a particular candidate or candidates to a public office which shall include: 4) Publishing or distributing campaign literature or materials designed to support or oppose the election of any candidate. Filipino politicians satisfy themselves by paying the service of somebody to make a brownie points ads only for themselves like “Nasubukan mo na bang lumangoy sa basura?” or “Mr X the Action Man!”.

****
In case Obama makes it on Tuesday (Wednesday in the Philippines) on the present neck and neck derby, he should be thankful too to the timing of killer Hurricane Sandy where his mettle through his immediate and effective assistance to the states gnawed by Super Storm Sandy was tested (Republicans however dispute this because of the long queue and the gas and power shortages that infuriated people on those affected areas) . As a result nominal Republican Mayor Michael Bloomberg of New York and dyed-in-the wool GOP Governor Chris Christie of New Jersey “kissed” him and paid him obeisance just like what Amerigo Bonasera to Don Vito Corleone in the God Father.

***
Gezz, the stout Governor Christie, who spitted fire at Obama before, could be likened to Filipino politicians who piggy-back at a snap of a finger at the popularity of Obama’s feat in the Sandy’s debacle. Everybody knows he was doing this for his re-election bid? Morris, Romney, hard line GOPs just cry your heart’s out on this circus in New York and New Jersey! This Murphy’s Law on the part of Romney (imagine a storm crashed a week before the election that favors the enemy?) was no different to a toss-up contest in towns, cities, and provinces in the Philippines after the command votes of the Iglesia ni Cristo (a religious sect) entered the scene in favor of a certain candidate.
(You can read my columns at http://mortzortigoza.blogspot.com. You can send comments too at totomortz@yahoo.com).
Ipinaskil ni Mortz Ortigoza sa 4:53 PM Walang komento:

JDV on disputes between China and neighbors

Former five - time Speaker Jose de Venecia discusses the growing belligerence of Mainland China in the South and East China Seas vis-a-vis the South East Asian nations and Japan. Northern Watch's columnist Mortz Ortigoza interviewed the former speaker., Excerpts:
Northern Watch (NW): Former President Fidel V. Ramos said in recent interview that Mainland China cannot be an aggressor forever because the Association of South East Asian Nations that includes the Philippines has 600 million people which are economically rising to challenge the Sinos in trade dominance someday. Can China afford to lose these countries as trade partners because of its incessant incursions on the disputed isles in the South China Sea?
JOSE DE VENECIA JR (JDV): Our formula, our strategic joint exploration solves the problem. The problem between (Mainland) China and the Philippines has the same solution as the problem between China and Japan. It can solve the problem with Japan and (South) Korea and their disputed water. (The formula) is a China- sea- wide solution between the Philippines and Malaysia because we have conflict there. It is also the same solutions to the Philippines and Vietnam. It is not only for the Philippines but for the problem of Japan.
NW: Why do these countries don’t adopt your formula?
JDV: Because nakalagay lang sa conscience natin (what was in our conscience) China is a multi-sided multiple conflicts and a complex issues. My proposal for the joint exploration (on the disputed water and isles) is profit sharing, reasonable profit sharing. At the same time the real solutions of this problem are reconciliation and development. That is the solution!
NW: Do you think war is inevitable between Japan and China as the former is determined not to give an inch of the Senkaku Islands or Diaoyu Islands for the Sinos ?
JDV: That will be forestalled again by our joint formula may 50-50 sila (they can divide 50-50) from the resources, the gas, 50-50. It is the same 50-50 formula to solve the water dispute between Japan and Korea. I just came from East Timor Sea where the (gas) resources between Australia –East Timor in North Darwin have shared for joint exploration. The same profit sharing in the Caspian Sea among Iran, Russia, Kazakhstan, Tajikistan, Azerbaijan.
NW: What’s your take on Edward Luttwak’s, a senior associate for the Center for Strategic Studies in Washington, USA, and consultant to the Pentagon, thesis on his provocative book “The Rise of China vs. the Logic of Strategy” that the Chinese have been imbecilic enough to re-launch territorial quarrels with Japan, Vietnam and India more or less on the same day, when those three countries have more people, more money and more technology than China. Would severing of ties economically with these countries possible as based on the thesis?
JDV : All of these are possible, that’s why our formula will forestall it. It’s all about the political crisis there, the economic wars will that will follow with this conflict.
NW: Is the growing bellicosity of China in the South China Sea and in the disputed waters in Senkaku Islands is because of the forthcoming election of the leadership of the Chinese Communist Party this November? That party leaders want to portray their patriotism to ingratiate with the party members?
JDV: They have already decided who will be the president and vice president. They have already decided who will be the prime minister there is no need for that bellicosity.
NW: Press reports said the hard-line stance of the Prime Minister Yoshihiko Noda of Japan to nationalized Senkaku against Chinese’s incursions there was because of his forthcoming re-election in Japan?
JDV: In this case that must be necessary because he is for re-election. He is to ensure the victory of his party which is the Democratic Party of Japan - the ruling party which is now facing difficulty. That's why he has taken a high profile stance on the isles.
Ipinaskil ni Mortz Ortigoza sa 3:52 PM Walang komento: