The “Luck” brought by 18th of April for candidates

MANGALDAN – Candidates for the May 14 Barangay and Sangguniang Kabataan  Elections (BSKE) all over the country brave the scorching summer sun and the inconveniences of a long queue just to file their Certificate of Candidacy (COC) at the offices of the Commission on Election because of the magic brought by April 18.
Sta. Barbara, Pangasinan Mayor Carlito Zaplan and Sual, Pangasinan Mayor Roberto Arcinue said that candidates in the 44 towns and four towns’ Pangasinan province observe this superstition since time immemorial. 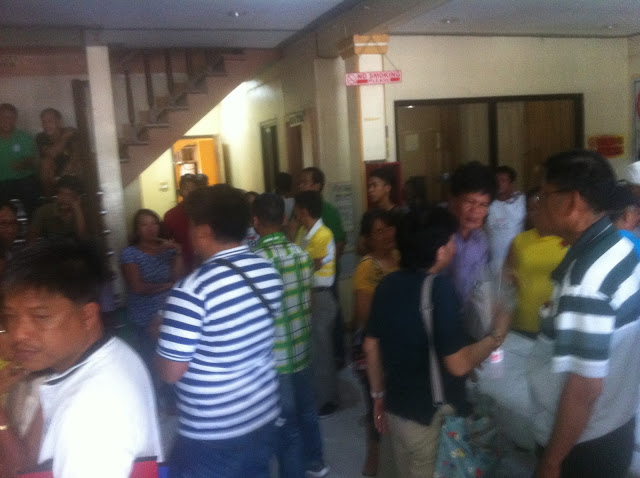 LUCK - Candidates for the Barangay and Sangguniang Kabataan Election (BSKE) in Mangaldan, Pangasinan scramble inside the limited space of the Election Registrar of the Commission of Election in the Central Pangasinan’s town because of the supposed luck brought by 8 in April 18. MORTZ C. ORTIGOZA
Both chief executives said the Comelec offices in their towns were jam packed with scrambling zealots.
Punong Barangay (Barangay Chief) Alicia Velasquez of Pogo this town cited that the April 18 mad rushed at the Comelec was phenomenal in the entire country.

“Pataas e, saka itong araw na ito araw na pinakamatigas,” Dante Enriquez Cera, a seasoned radio commentator who vied for re-election for the Sangguniang Barangay (Village Legislative Body) of Banaoang of this burgeoning town, cited.
He said that the diagonal and curve lines of ocho or “8” in 18 goes up to the end point.
He cited that April 15 brings luck too to bets because the singko or “5” has an upper end tip point.
The filling of CoC started last April 14 and ended at 5 pm of April 21.
According to numerology.com, 8 is the great Karmic equalizer, a force that just as easily creates as it destroys. When the 8 comes knocking, you can be assured that you will reap what you have sown. The 8 balances the material and immaterial worlds. At its best, it is as spiritual as it is materialistic.

Deo Lopez, a radio reporter, cited that “20” just like “18” gave lucks to candidates because of the circle around “0”.

Punong Barangay Velasquez said, like what Cera explained, that the last digit 8 has its diagonal and curve lines.
“This is different because of 18,” she said in Pangasinense.
She compared the sluggish influx of candidates last April 16 to the wild hurry of bets in April 18.
Velasquez brought her entire ticket of seven bets for the council while her opponent and his entire ticket had filled their candidacies in April 16.
When asked that they will lose because the “16” in April has no significane versus the “18” in April, Velasquez chuckled and differed.

The Lord she mentioned was the Powerful Lord Almighty’s King of the Universe who is worshipped by the Christian World and not the illegal number Jueteng Lords in 44 towns and 4 cities’ Pangasinan province who are worshipped by politicians because of their propensity to give huge financial supports to some bets for a chance to win the poll.
Comelec records in Pangasinan say that there were a total of 1,276 and 8, 991 candidates who filed their COCs for the village's top post and the Sangguniang Barangay (SB), respectively on April 18.
Meanwhile, there were 1,132 and 8, 188 bets that filled for the Punong Barangay and SB posts, respectively, for April 14 to 17.
For the SK, there were 651 and 2,426 candidates who filed their COCs for the youth body’s top post and council membership, respectively on the April 18 while 788 and 2,653 submitted their COCs for the SK Chairmanship and Council’s post, respectively, four days prior to  April 18.

Punong Barangay bet Salvador Visperas de Guzman of Amansabina cited what he read on the Lunario (Lunar Calendar) that “16” and “18” were the luckiest numbers in the six days filing of CoC’s period.

NARCS TEST - Bets for the Punong Barangay (Village Chief) and Sangguniang Barangay (Village Legislative Body) wait for the result of their drug test as they converged to the gymnasium of Lingayen, Pangasinan to be included in the test as the police warned those non-cooperative candidates that they would be monitored for any narcotics related activities. MORTZ C. ORTIGOZA

“Para sa akin din maganda ang 16 kaso kabilugan ng buwan. Maganda rin kaso marami doon ang negatives na nandoon. 16 to 18 maganda. 20 not maganda”.
But there are non-believers on this superstition that became a practice of Filipinos since the Spanish colonization of the country centuries ago.

“Wala, superstitious belief on the number, the belief!” Maryknoll Pangan Soriano, a Bachelor of Laws graduate, who ran for the chairmanship of Barangay Tebag here, declared.
When egged why she still filed with her ticket and not on the following day of April 19, she said most of her bets felt better to file simultaneously on the 18th.

De Guzman who understands the nuances of the Lunario and astrological signs, was skeptical however about his Wednesday or April 18 filling of his CoC despite comprehensively reading the Calendar. What concerned him was the dilemma he faces against the financial juggernaut of Ramon Mejia, the brother of Dr. Roland Mejia, the Director of the Region-1 Medical Center (R1MC), in Barangay Amansabina.
Director Mejia is dubbed as the Medical Czar in the humongous province and was rumored to aid the mayoralty candidate of this town in the May 9, 2016 election.
De Guzman also lamented the desertion of his two bets for the council to the camp of his rival.
“Nabili ang dalawang member ng slate ko”.
He said he would be enmeshed in a three-cornered fight for the Kapitan’s post in his village.

BROADCASTERS: Dagupan City radio based broadcasters Dante Enriquez Cera and Deo Lopez explained the importance of the Lucky 8 in April 18 why they have to shove and jostle with other candidates to beat the date in filling their Certificate of Candidacy (COC) for the elective post of the village legislative body. MORTZ C. ORTIGOZA

Punong Barangay candidate Dante Paragas, a former aid of then Lingayen Mayor Jonas Castaneda, said he and his ticket motored for more than an hour at early dawn last Wednesday to the miraculous Our Lady of Manaoag Church in Manaoag town, Pangasinan for the real Lord’s blessing, went to the Comelec in the capital town’s Lingayen at 8:30 am on the same day and joined the sea of bets that wiggled in to submit their CoC to the officials there.
“We finally submitted our C.O.Cs at 6:30 pm. It was tough inserting ourselves, but we have to file it on the 18th of April,” he stressed.
With the Almighty’s blessing in Manaoag and the luck April 18 gave him and his ticket, he said his party is a force to reckon versus his two opponents who did not file on the 18th.

In the 2013 village poll, he lost and had a fall-out with then Mayor Castaneda because the latter supported the incumbent village chief and ignored him despite his being a faithful gofer to the mayor for countless of years by running errands and driving his Sports Utility Vehicle.

(You can read my selected columns at mortzortigoza.blogspot.com and articles at Pangasinan News Aro. You can send comments too at totomortz@yahoo.com)

Time to tease JV, Bam overtakes him in Senate's Polls

When I asked early this year reelectionist Senator Jayvee Ejercito, the son of a former President, about his take on the poor political poll’s stock of reelectionist Senator Bam Aquino on the December 2017 Social Weather Station’s senatorial preference, he retorted with a guffaw: “Iyon ang may malaking problema!”

He referred to the poor performance of Aquino on the survey despite being in the Top 20 of the 12 senators needed to win so they can be in the August Chamber for the 2019 -2025's term of office.

Ejercito and Aquino were numbers 11 and X (Rappler.com did not give the rank), respectively, on that survey.
Magbasa nang higit pa »
Ipinaskil ni Mortz Ortigoza sa 10:57 PM Walang komento:

How a P5M funds transformed an SK Prexy into a BM

The position as lawmaker commands the same respect, emoluments, and pork barrel distribution from the power- that- be in the province.
The parents and politicians zealously bankroll and see their bets win so they can either becomes a councilor or a board member and “flaunt” the “Honorable” title appended before their names.
***
Here’s how monies played a role for the victory of these bets:
Magbasa nang higit pa »
Ipinaskil ni Mortz Ortigoza sa 10:55 PM Walang komento: