Pacquiao vs. Mosley: One Big Swing 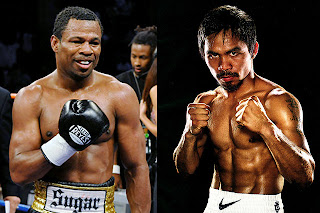 By Mortz Ortigoza
If Manny Pacquiao blitzed- out to oblivion Eric Morales, Ricky Hatton, and Oscar de la Hoya, Could he Panzer-run multi-divisions champ Shane Mosley just like what those Krauts have done to Poland and other Eastern European Countries? Or would the bigger Pomona, California native would be his Dien Bien Phu?
To those who went to the johns when their teacher in World History discussed this scintillating topic, the Battle of Dien Bien Phu ensued in 1954 in a province that is part of the name of the battle in Vietnam. In that war, a colonial master –the French- were humiliated as they were defeated by a rag-tag impoverished pajama clad Viet Minh but fought like there was no tomorrow under the tutelage of consummate Vietnamese General Vo Nguyen Giap- the same general who dealt the Americans their first “defeat” in the Cold War Era.
“Is Shane’s tough as Gibraltar?” My half-Czech, half-Orangutan errand boy Procopio Matulis posed to me after we downed a case of Red Horse Beer.
"Probably yes because he doesn’t taste how to be TKOed or KOed," I retorted.
I told my half human pal that Shane is the bigger and stronger pug.
A tipsy Procopio, in between his bite of Kinigtot (sumptuous finger food composed of goat’s meat, innards, and half digested dung – you ask Manny, he eats this delicacy too we call also on its soupy version “Pinapaitan” ), kept pestering me that he wants more answers to this coming May 7 fight at MGM Grand Garden Arena in Las Vegas, Nevada.
“You want answers?” I emphatically mimicked actor Jack Nicholson in “A Few Good Men”
The answer is Manny should watch cautiously Shane’s lethal as tsunami right overhand and left hook that have TKOd big time in the 9th round Plastic of Paris endorser Antonio Margarito.
"It was my strategy, my focus, my game plan," Mosley said when asked what won the fight. "It was a tough fight, but it was a great plan. It was my left hook. I caught [Fernando] Vargas with it, I caught [Ricardo] Mayorga with it."
And he would catch Manny man with it if the latter is careless on this fight that Pacquiao would find the hardest of all his matches.
I told my errand boy that Manny, like a cosmetologist, grotesquely re-arranged only the Mexican face for him to look as a run-away winner in a mortician’s contest among employees of some funeral parlors in Vegas.
"But Manny did not TKOd or KOd Antonio, my dear Procopio."
Margarito has shown how tough he was in that fight.
Imagine, after he hit Pacquaio with that flushing left hook at his right kidney, it back lashed like nuclear fall-out  to the front seat of the Cowboy’s Stadium in Texas that knocked out big time Aling Dionesia (Filipino superman’s funny"mi Asim pa ito" mom who is now a famous model of a vinegar  in the Philippines)
If the awkward punching and slow moving Mexican can hit and hurt Manny (and his mom, if you still insist you nincompoop), how much more Shane can do it? Mosley’s hand and foot speed is five times faster than Margarito. It overpowered de la Hoya during his peak in 2000. And I ain't talkin' here about a washed-up and drained Golden Boy when Manny stopped him at the 8th Round last December 6, 2008?
Despite the nostril breathing problem, Shane still knocked down and knocked out the brash garbage trashing Ricardo Mayorga-- a grasped of a second before the end of the 12th round. He also TKOed Fernando Vargas in Round 6 of their re-match in 2006.
His loss to the then undefeated dangerous Miguel Cotto, in their competitive fight in 2007 was hotly contested.
His trainer-father Jack blamed that nostril problem, which zapped his stamina, as the culprit why he did not dominate Miguel.
But after that nose-job he TKOed Margarito in that 2009 blow-out.
If Shane’s lackluster performance with Floyd Mayweather and Sergio Mora’s defensive-bicycle riding style could be likened to the tranquil easy feeling Earl Klugh, his upcoming tussle with a smoking whirling dervish Manny could be likened to the adrenalin powered Scorpion’s or AC/DC’s rock music.
"Holly Molly, we should brace ourselves for this war," a wide eyed Procopio cried.
“Bloods would be everywhere on the dais in this fight. Manny loves to come. Shane loves to come, too! My friend”
Mosley declared recently that the propensity of Pacman to come would be his Waterloo.
He is polishing his big guns for the kill for the Filipino’s homecoming in the ring.
Geez man, he confidently said he would not be contented with a decision. He would KO Manny man in the 7th Round.
I’m still ambivalent about the prognosis of my errand boy's cousin Boy Ponobre (Hearse in English). He told me that if Pacquiao-Marquez II and Pacquio-Clottey are dubbed "Clash of the Titans" and "The Event", this forthcoming fight with Mosley can be appropriately called: “I’m Coming, to dare Shane's One Big Swing!”.
“Well, I just take a swig until May 7th”
Remember, my compatriot absentee solon Manny has all the uranium now that have emitted in Fukushima, Japan in his hands for Mosley to taste how to be KOed in  a big swing for a living.
((You can read my selected intriguing but thought-provoking columns at http://mortzortigoza.blogspot.com. You can send comments too at totomortz@yahoo.com)
Ipinaskil ni Mortz Ortigoza sa 4:29 AM 1 komento: