ALL HAIL THE CHIEFS - Mortz C. Ortigoza
interviewing or interacting with
the present and past Philippines' Presidents. 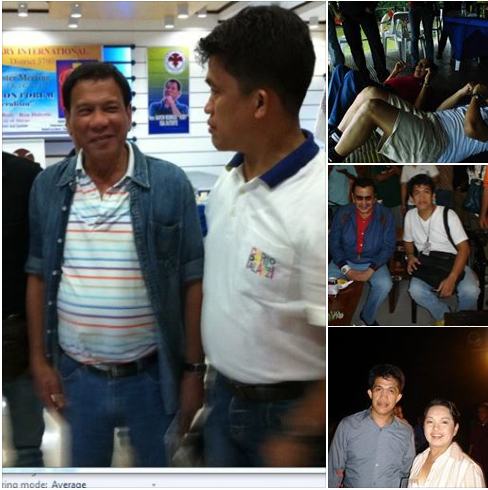 EXCERPTS OF MY INTERVIEWS WITH THEM:

Former President Fidel V. Ramos told me the U.S and China need not plunge themselves to war because it would be mutually assured destruction for them and to the U.S allies in the East Asia Region.

“You visit your homework. I wrote about this since 12 years ago. In the 21stCentury you don’t talked about the 19th or 20th Century. Nobody wants war especially World War III because of the massive destruction and the thermal radiation wave of modern weapons,” he said to me when he graced the inauguration of the satellite office of the Department of Foreign Affairs in Calasiao, Pangasinan.
Ramos cited an instance that the latest hydrogen bomb is 5000 times more lethal than the atom bomb dropped by the B-29 Super Fortress bombers at Nagasaki and Hiroshima in Japan on August 1945.
“You don’t need a B-29, you just pressed the button. But the U.S study says counter-strike. Somebody has to push the button with the coordination of the 38th Parallel. With the strike and counter strike all of a sudden all that will disappear,” Ramos, who is known as FVR, said last Sunday.
He explained that a war between these military and economic powers will wipe- out the entire 7.2 billion world’s population.
I disagreed with the prognosis of the former president.
I said the Chinese is restrained to use nuclear arms because it has no capacity to counter strike and hit the U.S mainland while she is vulnerable from the bombs in the U.S bases in Japan and the Philippines and the aerial and naval armaments of the U.S in the South China Sea.
“The U.S is in the strategic location in case war explodes as a result of the brinkmanship done with each other by these two powers”.
The most modern Chinese long range strategic bomber H-6K and its next generation bomber’s H-10 that carry CJ-10A cruise missiles with conventional or nuclear warheads, could not strike and hit the Mariannas, Guam, Hawaii, and U.S West Coast without putting bases somewhere in the Okinawa and the Ryukyu Islands. The Chinese ballistic missiles could be identified by modern radars of the U.S and destroy them on air," I cited.

ME: Sir, are you not threatened by the pronouncements that the military and the U.S will harm you?

MAYOR DUTERTE:  If God wants me to be there. If it’s destiny to be assassinated…hangang diyan lang ako! 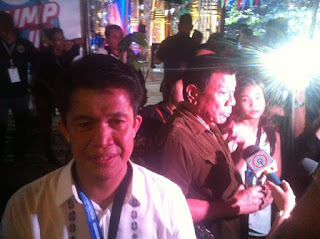 ME: They are apprehensive because they said when you become president it means good bye to EDCA (Enhanced Defense Cooperation Agreement) and the military aid from the U.S would stop…?
DUTERTE: Who?! Mga Amerikano?!
ME: I read that on the community page of the military at Face Book.

DUTERTE: Let us see why? Are we dependent on the United States for our problem here?
Is the United States ready to die with us for us on the Spratly issue?
It we start war because talagang hinde na makapasok ang fishermen we are deprived of a rich fishing ground, and we declare war, is America, is EDCA useful to us? May pakinabang ba sila sa atin?