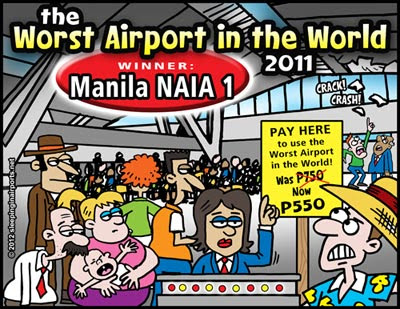 I am not impressed by the government’s come-on: “It’s more fun in the Philippines!” This is empty rhetoric. We Filipinos are good only in sloganeering. How can you attract tourists, particularly deep pocketed foreigners to come to our shores and start spending their monies when a toilet bowl at Terminal 2 in Manila could not even be provided with toilet paper by airport officials ( I know this because I was a victim of this when I arrived from abroad). A hotel in Dagupan City shuts-off its water system even before midnight because its owner wanted to save power and water bills, and another hotel seems to have an air conditioners that are programmed to decrease its cooling system from cool to hell as hours pass by. Even how catchy is our country’s slogan originally coined or plagiarized (hey, are the Swiss listening?) by the wise guys at the Department of Tourism, the figures speak that in terms of drawing tourists we are still a wimp even in our backyard South East Asia.
Magbasa nang higit pa »
Ipinaskil ni Mortz Ortigoza sa 8:48 PM Walang komento: