Without the Senate’s counterpart bill for the postponement of the village poll, the barangay and SK (Youth) election in May 14 this year is inevitable.
"Tapos na ang Senado, tapos na ang Kongreso. Wala na kami, e (inaudible). Tapos na iyong barangay election," Senator Cynthia Villar told me when I asked her last Friday about the absence of the counterpart bill from the Upper House and Congress already in recess and will be back into business a day before the poll.
Everybody will be happy as of April this year. Ingratiation and vote buying by the candidates for the village chiefs, the council members, and even the parents of the SK or Sangguniang Kabataan will be ubiquitous in every nook and cranny of the country. 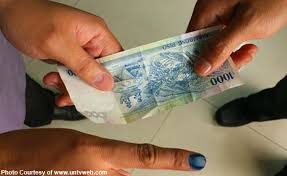 A first class town mayor told me that he will interfere by funding the candidacy of his village chiefs despite the monies given by his rivals to those barangay kapitans.
Magbasa nang higit pa »
Ipinaskil ni Mortz Ortigoza sa 6:02 PM Walang komento:

2019 Polls will be costly in this place

The 2019 local election will be costly for some candidates running for election and reelection in the 44 towns and three cities’ province of Pangasinan, a town mayor cited.
The mayor, who asked anonymity, said a gubernatorial aspirant needs about half-a-billion pesos just to buy votes to ingratiate from the voters and the mayors.
“Ilagay mo Five Million Pesos allocation sa 44 town mayors, that will be P220 million. How about the five million pesos for each of the 44 towns where the candidate will buy votes? That will be another P220 million. How much will be the total expenses? A staggering P440 million!” he cited.

He said the almost half – a-billion price tag will not be enough to effectively clinch the provincial diadem, he needs another hundreds of millions to have an edge in a poll where wherewithal counts as the silver bullet.
Magbasa nang higit pa »
Ipinaskil ni Mortz Ortigoza sa 5:55 PM Walang komento: