A sergeant told his officer he wanted to save a civilian who was limping because of a gun shot on his leg. The wounded was helpless at the rubbles and wreckage of houses where enemies were hiding, too.
The captain not only granted the request but crawled with him to cover the gunny with fire (in case the bad guys shot at them) as he retrieved the one – leg capable man.
The officer was startled after he saw weak, helpless, thirsty, and famished children and women just waiting for miracle to pluck them out to the hellhole the terrorists brought them into.
As the wounded man was carefully hurried up by the sergeant to the military side, the captain wondered why he did not hear a shot of a gun fire against them.
Seeing an opportunity to the extra ordinary gestures of the enemies, he negotiated with them to free the other hostages after they told him they were thirsty and hungry too in a war that saw them running away  for weeks from the gung-ho soldiers backed up by modern military hardware not only provided by their government but with foreign powers.

Father Poises to Throw the Grenades to the Enemies

The first time I saw my military father ready to die for the motherland or probably for my mother, I was in Grade 5 in M’lang, Cotabato Province.
He was then on a soldier’s pass when he brought me and my kindergarten brother Gabriel to a rickety worn out wood walled barbershop which, I still remember, was owned by the father of my playmates Stephen and Toto Felipe.The latter, a rugged boy, had fisticuffs with me, but that’s another story.

When we were seating at the worn-out barber couch elevated by small wood boxes to raise our heads, some peasant women running and shouting with their lungs out that the Black Shirts (precursor of the Moro National Liberation Front) were already at the periphery of the Peñaranda Hospital.
The hospital was more than a kilometer away from us.
Immediately my father told the frail looking barber Mr.Felipe to forego our military white style wall haircut (that I detested because I envied the mop haired Beatles) because he had to secure us and promised to return with his weapon and later with us whose side of the heads were already shaved just like those plebes at the Philippine Military Academy where my siblings and I were born.
Magbasa nang higit pa »
Ipinaskil ni Mortz Ortigoza sa 3:15 PM 2 komento:

Is Our Country Going to the Dogs?

Reports say foreign direct investment (FDI) inflow declined middle of this year.
So with a diminishing FDI, is this rambunctious country where people especially the dirt poor, breed like rabbit, going to the dogs?
Arf, arf, arf, no!

As long as we have overseas foreign workers (OFW) that grow by three to five percent a year and sent tens of billions of U.S dollars yearly (U.S $28 Billion or P1.4 Trillion last year) because of the incompetency of the political leadership to create employment atmosphere, we will have laborers and electricians that would be building these OFW houses and condominiums, we will have teachers and restaurant owners to serve the college children of these workmen, and we will have salesladies to serve big malls like SM and Robinsons where the OFWs and their family buy their fancy branded clothes and relished themselves with foods at those franchised restaurants there.
Magbasa nang higit pa »
Ipinaskil ni Mortz Ortigoza sa 4:26 PM Walang komento:

Last Holiday, one of the political kibitzers and my regular blog reader in the province visited me at home and reacted to my previous column I'm Retired in Politics in 2019
where I opined that former Fifth District Representative Kimi Cojuangco would not seek reelection but her husband Former Congressman Mark challenges again Pangasinan Governor Amado I. Espino III in a very expensive 2019 election.

“My source told me Danding feeling bad about what happened to his son would bankroll his candidacy,”
I quipped as I extended to him the plate full of Kinilaw na Tuna (Raw  Yellow Fin Tuna) marinated in vinegar and kalamansi with raw strips of radish, cucumber, onions, ginger, bell and native peppers, whatchamacallit I made, Davao City style, after he quaffed his negative 8 Celsius or  zero cold bottle of Red Horse.
I told him that even Cojuangco can still be defeated by the young Espino, it would be Pyrrhic victory.
“You know what Pyrrhic is?

“It’s a victory that inflicts such a devastating toll on the victor that it is equivalent to defeat. One could be victorious but the heavy toll negates a true sense of achievement,“ he retorted.

“Ya, it was about  King Pyrrhus of Epirus  whose army was tragically damaged in defeating the Romans at the Battles of Heraclea and the Asculum hundreds of years ago,” according to the pambalot ng tinapa I accidentally read,”
I said.
Susmariosep, who was that U.S president who quipped after he won his Pyrrhic reelection? "Another victory like this and our money's gone!"

It would be Pyrrhic because unlike the limited wherewithal of Mark in the 2016 “battle”, this coming election would be financially very heavy because the Espinos would be spending too as Danding poured his monies for his son.
Danding Cojuangco is the Chairman of the largest food and beverage corporation in the Philippines San Miguel Corporation.

My friend told me he got not only a formula but a “Solomonic” Solution to avoid this “Down-in-the Trenches” War where both families reconciled and relished just like the old days when they regularly broke breads.
“They talk with each other. Espino would tell Mark, he can run unopposed in the Fifth District and becomes a congressman again with a turf to boot in that Eastern Part while Pogi (the present governor) retains the governorship,” he cited.
He added that both families saved their billions of pesos that they would be spending for the election hungry, vulnerable, and susceptible to you-know-what electorates of the land of Andres Malong and Juan dela Cruz Palaris.
“Where would (5th District) Congressman (Amado, Jr) Espino run for office? Urdaneta City, Bayambang, or even Alaminos City is too small for his stature comes the day of reckoning in 2019?,” I posed.
He said the solon can make a rampage just like what he did to Kimi Cojuangco by “bludgeoning” her in that mind numbing 133,381 votes  versus Kimi’s 92,943 in the last election in the “vaunted” turf of the Cojuangcos in Eastern Pangasinan.
“He can either run in the Third (Congressional) District or Fourth District”.
I told him that it is an easy win if he runs in the Third versus former Congresswoman Rachel Arenas or her Mother Rosemarie “Baby” Arenas because the Arenases, according to TV Host Jesse Perez, are not real Pangasinenses but Makati City residents.
“And Espine (the endearment for the solon) is dyed-in-wool Pangasinense who naturally speak the vernacular,” I said.
“No, Espino can easily beat any of the de Venecias like former Speaker Joe, former Congresswoman Manay Gina, or incumbent Congressman Toff,” he disagreed.

I told him that San Fabian Mayor Danny Agbayani was egged by Congressman Espino to challenge the perennial hegemony of the De Venecias in the four towns one city’s Central Pangasinan District but Danny declined profusely.
“I could not fight the De Venecias because they are, like you, my parents,” the undisputed two terms Mayor of the coastal town told his other patron Espino.
When I asked my guest last holiday if aside from Espino, who are the viable candidates to make a decent fight with the de Venecias, he told me it is either Celia Lim (wife of Dagupan City Mayor Benjie Lim) or her son Brian – the latter the present vice mayor of Dagupan City.
“But it would be Espino that would be a shoo-in in case he runs for the 4th District,” he cited.
“It would not be an easy task, the de Venecias have hundreds of millions of pesos to spend in a “take-no-prisoner” war and the district that has been their citadel for decades,” I argued.
“Their fortress is only Dagupan City, almost all the mayors in the four towns and the voters there are pro-Espinos and you can just look at the 2016 election. What more now that the Espinos are perceived as politically invincible and everything they touch, just like the Phrygian King Midas, turned into gold,” he cited how opponents in the gubernatorial races of the almost 3 million populated province like spouses Victor and Jamie Agbayani, Hernani Braganza, and Marcos Cojuangco crumbled like deck of cards against the Espinos’ political juggernaut.
He then concluded by citing how astute was Congressman Espino in flushing out the Cojuangcos by even pirating some of the pro-Cojuangco mayors there in that 2016 congressional race.
“Kung may tataas pa sa Doctorate Degree sa political adroitness, ano si Amado Espino, Jr” he posed to me.
“Quintessential Politician,” I replied.
“Petmalu Lodi (slang of Idol Malupit)! Pero ano iyong Quintessential, sir?” Galman, my unlettered errand boy who was silently imbibing his beer, posed.
“P*nyeta, wag ka maki alam sa usapan ng matatalino. Ito pera galing sa mga Americano bumili ka pa ng Red Horse sa 7-11 at Quintessential - sabihin mo iyong pampulutan na nilalagay sa Kilaw na Tuna ng Davao City," I barked at him.

PHOTO BELOW IS MY ERRAND BOY GALMAN WHO WAS CURIOUS TO KNOW WHAT IS A "QUINTESSENTIAL POLITICIAN". 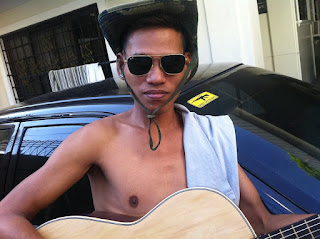 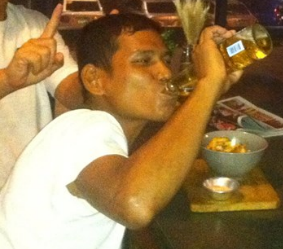 “Son of a gun, so the PC had the likes of  Colonel Amado Espino while the other branches of service had their heroes. Were you familiar with Army’s hero Julius Javier (PMA '70) and legendary artillery man Army General Rodolfo Canieso (PMA '56)?" I posed to Congressman Leopoldo "Pol" Bataoil.
Si Julius Javier may movie pa titled the Scout Ranger!” I enthused.
Bataoil, a former police two-star general, emphatically told me the feats of Javier, an Ilonggo like me.
“Even as company commander he joined patrol and engaged the Muslim rebels in Mindanao in a fire fight. There was an incident where Moro snipers were hiding on the trees in the forest and they were pinning down his troop”
Bataoil recalled how Javier ordered one of his men to run as bait for the sniper.
“Ninerbiyos ang sundalo but he had to comply while running as the sniper tried to pin him down. Javier watched where the shot came from then Javier fired at the location of the sniper”.
Sometimes the sniper, the solon explained, could not be hit and he had to order another soldier to run as bait.
“One of the soldiers dreaded that he would die would not comply with the order. An angry Javier then asked him to watch and fire where the shot came from as he would use himself as the running target.
After he ran, he shouted at the nervous soldier if he hit the shooter from the Moro National Liberation Front (MNLF).
“Hinde po sir,!” the soldier shouted back.

READ MY OTHER ARTICLE: