The sights in Alaminos City, as seen on TV lately, were heart wrenching.
An older brother Lyndon Milan mowed with his M-16 assault rifle and a single shot from his .45 caliber pistol a younger brother police Supt. Lloyd Milan and his wife Cherryl.
Then the remains of the victims were seen being shipped to the southern province of the country Surigao, the home province of Cherryl.
The dead Milans’ 13 year-old eldest son told the TV reporter that his father’s mother, sisters, and brothers conspired to kill his father.
Lyndon used to be my co-faculty in college. We had some warm chit-chat at the City Hall of Alaminos, where he worked, a week before the carnage without me knowing the gruesome incidents that await a week later.
The kin of his father did not show-up during the entire wake.
A “distressed” Mayor Nani Braganza quipped how Alaminos City lost a first potential general in Colonel Milan.
The slain police officer was a graduate of the Philippine National Police Academy.
His and his wife’s death, according to my source, started when his parents’ fishpond was mortgaged to him.
***
If you enter the office of Assistant Superintendent Dr. Shiela Marie Sison-Primicias , you will see three columns of pictures on a long bond paper posted at the glass window of her office for all to see.
Column 1 is about two dirty comfort rooms in her division office called Pangasinan-1 in Lingayen, Pangasinan.
Column 2 is a photo of a refurbished well-tiled spic –and-span comfort rooms after the old comfort rooms in Column 1 were renovated by Dr. Primicias in her 36-day brief stint as OIC superintendent of Pangasinan-1.
This after Dr. Aurora Domingo, Superintendent of the Division, went for a two-month vacation in the U.S.
What infuriated Dr. Primicias and those who dropped at her office were the photos at Column 3.
All of those tens of thousands of pesos worth of renovated comfort rooms in Column 2 were in rubbles as if they were bombed by the NATO forces in Libya.
***
The person responsible for this demolition should be sued with criminal acts. This is not only Malicious Mischief. This is taxpayers’ money that went down the drain because of stupidity.
As you know there is internal “squabbling” among Dr. Domingo, Dr. Danny Sison, Dr. Primicias.
Kung sino man sa inyo ang nag-utos na ipa-demolish iyan dahil mi mga away kayo diyan, sana naman iniisip niyo na ang dinamay niyo ay government funded project.
Managot kayo!
I am calling the attention of DepEd. Secretary Ermin Luistro, Governor Amado T. Espino, and chairman of Education Committee (and the saving grace of the provincial board) Board Member Ming Rosario to investigate and mete penalties on those who were involved on the outrageous acts there.
***
The names for new positions for teachers given by Sec. Luistro to Dep Ed ­are now mostly coursed through congressmen instead of the division offices of the education department.
This new policy is to avoid corrupt division superintendents who sell these new items to willing teacher applicants.
According to my source, Dep Ed central office finds it safe against corruption- hold your breath -to give these quotas to congressmen.
My other source told me that a school superintendent could sell each item up to P135 thousand to P150 thousand for an applicant.
But if it is given to a solon, the lawmakers would just give it to the son or daughter of his supporter who are board passer and who are included on the rank’s lists of principals.
He said that bigwigs at DepEd central office know that these applicant- protégée of the solons are not fleeced — even if they are listed at the bottom part of the ranking of their application.
Under the” Matuwid na Daan (Straight Path)” of President Benigno Aquino, Jr., a congressman is given up to 50 quota while a superintendent is given only a measly ten quota for new positions.
***
A division that covers up to four congressional districts is given up to 200 new positions through the lawmakers.
A lowest rank public school teacher now receives P19 thousand a month pay.
With a bill now being deliberated in congress, this amount would balloon to P32 thousand a month, according to a high ranking education official.
With a handsome sums dangled to would be applicant in the public school, vultures like these superintendents and principals proliferate.
(You can read my selected intriguing but thought-provoking columns at http://mortzortigoza.blogspot.com. You can send comments too at totomortz@yahoo.com).
Ipinaskil ni Mortz Ortigoza sa 4:32 PM Walang komento: 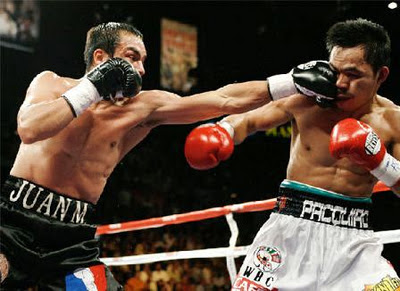 By Mortz C. Ortigoza
When Juan Manuel Marquez duke it out with Floyd Mayweather Jr. at Welterweight in September 2009 he brought there his punching speed but lacked the power that incessantly snapped out the head of Manny Pacquiao when they fought in their first two matches.
When Pacquiao fought Miguel Cotto and Antonio Margarito at the catch weights of 147 (welterweight) and 150 (Junior Middleweight) in November 2009  and  November 2010, we saw how his right hand has been  transformed by Freddie Roach and Alex Ariza into a  rocket-launcher-carrying Fedayen combatant.
It Knocked down Cotto with a hook in the third round, while it re-arranged grotesquely Margarito’s face on the entirety of the one-sided beating.
Although the bobbling and weaving Floyd has amazingly outclassed the confused lil’Juan (whose punching powers have been lost to pickpockets in Distrito Federal in Mexico during that fight), Pacquiao’s  much heavier power punches would be a factor to weaken and destroy him.
What Manny should do in this rubber match?
Cover his face with his gloves, steamrolls Marquez by target shooting him with his right punches just like in Cotto and Margarito. Emulate Joel Casamayor (Marquez opponent in September 2008) strategy in counter punching by hitting him with a shoulder right straight. Then Manny docks and hit Marquez with his lethal left hook to the chin just like what he did to him in their rematch that saw the latter staggered and crashed like crazy on the dais.
If the least powerful and over-the –hill Casamayor has done this to Marquez, why not an improved, fast, and furious Pacquaio?
Cut the absconding Marquez to the right with the Manila Ice’s right hook as Dinamita back tracks clockwise because he avoids Paul McCartney’s right hand located “Bang-Bang Silver Hammer”.
Pacquiao’s vulnerabilities
Every time he turtle-shield, he left an opening between his two elbows that become a welcome hole to what a rapist to his victim.
You asked Joshua Clottey and Cotto what “hath you done my sons” to this hole with their uppercuts. Man, it jerks up the head of the Filipino congressman.
In the thick of an exchange, Manny allowed his left face to be exposed to counter as he has the tendency to lower his left glove after unleashing it.
He should watch the treacherous “45”. A technique trainer Nacho Beristain employed where his fighter trigger a flushing left hook to the kidney and a deadly right straight to the right face
Comparative Advantage of Pacquiao to Marquez
If Manny is 32 year-old, Marquez is already 37 years old.
The rubber match Marquez is going to do in November 12 in the U.S is not a chasing game with the Vietcong as what Mayweather has brought him in.
It would be a hell-hole.
Although he runs clockwise with Manny as part of his defense, Marquez is an offensive take-no-prisoner fighter every time he sees a chance to attack.
This style could be his Waterloo. He would be no longer dealing with a one-hand Douglas MacArthur in his hold outs in Bataan and in Corregidor. He would now be dealing with a General Herbert “Stormin’ Norman Schwarzkopf with all the available munitions except the roundhouse kick and the axe kick at his disposal.
This would be a war that Shane Mosley-whatever “swindled” fight plans he discussed with Top Rank - would be ashamed of.
Would Father Time and the  wars the 37 year-old Marquez had  spent with the likes of Antonio Barrera, Michael Katsidis, Juan Diaz, Rocky Juarez catches on him as he tangles with the modified, innovated, and primed Filipino superman ( except superman’s handsome face) and boxing pound-for-pound king ?
(You can read my selected intriguing but thought-provoking columns at http://mortzortigoza.blogspot.com. You can send comments too at totomortz@yahoo.com).
Ipinaskil ni Mortz Ortigoza sa 1:54 PM 1 komento: