By MORTZ C. ORTIGOZA
This columnist, who used to preside over media men in their Kuatro-Kantos sessions, became an accidental resource speaker in a command conference composed of police colonels and majors of the Pangasinan Police Office and chiefs of police where OIC Provincial Director Marlou Chan asked them to brainstorm my observation on my previous columns on the mode of searching vehicles and the predictability of checkpoints. I wrote before that Rep. Leopoldo Bataoil (2nd District, Pangasinan) agreed with my observation that police men manning checkpoints should not be tied on visual search because criminals make them a laughing stock. Bataoil said peace officers worth their salt should use judgment call on how to search and seize illegal objects hidden inside the cars or motorcycles without the benefit of search warrant. He agreed with what I wrote that “consent” among motorists is enough to open their trunks and compartments as a lawful means to search vehicles without a search warrant. Colonel Chan and deputy provincial director Lt. Colonel Sison the two diminishing numbers of PMAyers (PMA last production of PC, the precursor of the PNP) was in 1992) at the Philipine National Police who are torn by the “sea” of Cavite graduates (Philippine National Police Academy like the snappy 6 –foot two- inch Dagupan City chief Lt. Colonels Cris Abrahano and Rodolfo Castro) and ROTC graduates like UPang’s (University of Pangasinan) pride Lt. Colonel Poly Cayabyab have a good time discussing with this writer (a humble graduate of MPSB or Mababang Paaralan ng San Andres Bukid) the nuances of what is the significance of a checkpoint and “judgment call”. Lt. Colonel Sison said search warrant is not necessary anymore when there is hostility inside the car like “nag-aaway na sila duon.”. Chan objected to the observation of his fellow Cavalier because hostility inside the car is already too obvious for the PNP to pacify by entering the car without the warrant. He asked his subordinates to explore the judgment call (e.g motorists acting nervously) Bataoil, a former two-star police general, espoused. Chan said being nervous could mean the motorist is hiding something illegal or he is being nervous because he fears the police would “plant” something illegal in case he opens his car or motorcycle.

Political observers opined that barangay (village) election in the Philippines is more intense emotionally than the provincial and municipal elections in the May 13 polls this year.
The protagonists in the village elections, they said, have more personal ax to grind against each other than their counterparts in May 13.
There is this perception that killings through the use of guns particularly among political rivals and their supporters in this poll could eclipse those numbers of corpses in the May 13 electoral derby.
Barangay election is fast approaching. It would be held on October 28 this year.

PNP incorporates Stop and Frisk
Since this writer was “flattered” by the disclosure of Pangasinan Police Director Senior Superintendent Marlou Chan that his article titled “Police Stop and Frisk help Lower Shooting Incidents “(that compared shooting incidents last year in the 8.5 million populated New York City that claimed 450 lives versus the 3 million populated thriving gun-for hire province Pangasinan where killers snapped out 249 lives in the same year (you can accessed it at http://wwwmortzcortigoza.blogspot.com/2013/08/polices-stop-and-frisk-help-lower.html ) ) has been integrated in the Philippine National Police’s pilot project in Malasiqui town.
Police Regional Director Ricardo Marquez lauded recently on TV Chan and the provincial police rising star Lieutenant Colonel Rodolfo Castro (lately reassigned as chief of police of another "Tombstone" City  San Carlos) whose Lennon-McCarthy collaboration in the Squad Patrol 101 (Read: Police visibility, check point, etc.)  resulted in a zero shooting incident since the project’s inception recently.
The pronouncement of General Marquez on TV was refreshing since the 73 villages’ strong town has been a lair of hired killers according to the former chief of police there.
“Bawat barangay dito may hired killer (Every village here has hired killer),” he told me over a cup of coffee in his office.

Assassins in Pangasinan thrive as Village poll approaches
Now that the village poll is just around the corner, assassins are honing their target shooting accuracy and their motorcycle proficiency in their hideouts ready to go for business to clients who can afford their price tag.
If remains unabated, this turmoil will cause losses of precious lives, a broken peace and order situation as residents live in fear, anxieties among public officials as the acrimonious media assailed them for their incompetence to put a plug on hit men in a rampage.
As what I told former police general and incumbent congressman Pol Bataoil in the last national and local election that the police are afraid to do the stop and frisk or open the trunk and compartment of the motorists even with the latter consent because the police fear the motorists complain or sue them at the People’s Law Enforcement Board, human right bodies, or the court.
“That’s part of the hazard of the service. But as long as the policeman is doing his job properly and in accordance with their police procedures they can defend their actions even in Plaza Miranda,” the solon told me.


Brief history and legal dynamics of Stop and Frisk
For starter, here’s the brief history and legal dynamics of Stop and Frisk (Terry v. Ohio) if the PNP wanted to adopt it on the October poll so it can mitigate the number of shooting incidents and other gun related crimes.
On October 31, 1963, while on a downtown beat which he had been patrolling for many years, Cleveland Police Department in the United States detective Martin McFadden, 62, saw two men, John W. Terry and Richard Chilton, standing on a street corner at 1276 Euclid Avenue and acting in a way the officer thought was suspicious.
Detective McFadden, who was well-known on the Cleveland police force for his skill in apprehending pickpockets, he observed the two proceed alternately back and forth along an identical route, pausing to stare in the same store window. Each completion of the route was followed by a conference between the two on a corner. The two men repeated this ritual alternately between five and six times apiece—in all, roughly a dozen trips. After one of these trips, they were joined by a third man (Katz) who left swiftly after a brief conversation. Suspecting the two men of "casing a job, a stick-up", detective McFadden followed them and saw them rejoin the third man a couple of blocks away in front of a store.

Police approach the suspects
The plainclothes officer approached the three, identified himself as a policeman, and asked their names. The men "mumbled something", whereupon McFadden spun Terry around, patted down his outside clothing, and felt a pistol in his overcoat pocket. He reached inside the overcoat pocket, but was unable to remove the gun. The officer ordered the three into the store. He removed Terry's overcoat, took out a revolver, and ordered the three to face the wall with their hands raised. He patted down the outer clothing of Chilton and Katz and seized a revolver from Chilton's outside overcoat pocket. He did not put his hands under the outer garments of Katz (since he discovered nothing in his pat-down which might have been a weapon), or under Terry's or Chilton's outer garments until he felt the guns. The three were taken to the police station. Terry and Chilton were subsequently charged with carrying concealed weapons.

Guns seized on Stop and Frisk as Evidence
The defense of the charged individuals moved to suppress the use of the seized weapons as evidence (Filipino law practitioners called them Fruits of a Poisonous Tree) on grounds that the search and subsequent seizure were a violation of the Fourth Amendment to the United States Constitution (where Philippine Constitution adopted it at Section 2, Article III ( Illegal search and seizure" of the Bill of Rights).
Though the trial court rejected the prosecution theory that the guns had been seized during a search incident to a lawful arrest, the court denied the motion to suppress and admitted the weapons into evidence on the grounds that:
1) The officer had (reasonable doubt) cause to believe that Terry and Chilton were acting suspiciously;
2) That their interrogation was warranted, and;
3) That the officer for his own protection had the right to pat down their outer clothing having reasonable cause to believe that they might be armed.
Terry and Chilton were found guilty by Court of Common Pleas of Cuyahoga County (U.S version of the Philippines’ Regional Trial Court) , an intermediate appellate court (Philippines’ version of its Court of Appeals) affirmed the conviction, and the Ohio State Supreme Court dismissed the appeal on the ground that "no substantial constitutional question" was involved. 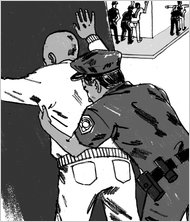 Despite the brouhahas spawned by the Stop and Frisk method by policemen in the cities of Philadelphia and New York, Filipino policemen who satisfied themselves to visual search can look how effective this method in deterring crimes like shooting incidents .
Stop and Frisk is a type of limited search when police confront a suspicious person in an effort to prevent a crime from taking place. The police frisk (pat down) the person for weapons and questions him.
According to the recent column of Dick Morris at DickMorris.com titled “ Stop And Frisk Decision Based On Tortured Reading Of The Constitution” the spate of crimes in the cities of New York ( 8.5 million population and Philadelphia (1.5 million population:) dwindled with 450 homicides and 334 homicides last year respectively.
“The ability to stop and frisk men lingering on street corners in the middle of the night in high drug and crime areas has played a key element in reducing the murder rate.
Particularly in concert with New York’s mandatory minimum three year sentence for possession of an unlicensed, loaded firearm within the city, the law has forced guns off the street and driven down the murder rate appreciably.
To measure the impact of the stop and frisk and mandatory minimum gun sentence laws, compare New York with Philadelphia. Both have lots of poverty — 21% in New York and 25% in Philadelphia. The per capita police presence in each place is comparable, “ Morris, a former Bill Clinton’s adviser, and Republican strategist, said.
***

“Imagine 450 shooting incidents in a population of 8.5 million in New York City versus the wild-west gun- for-hire Pangasinan with less than three million people, and we’re talking about New York as a city and not as a province.