POZORRUBIO  - At last a presidential bet courageously acknowledged that amending the Constitution for 100% foreign ownership just like in Indonesia, Thailand, and Singapore would generate more jobs among Filipinos. 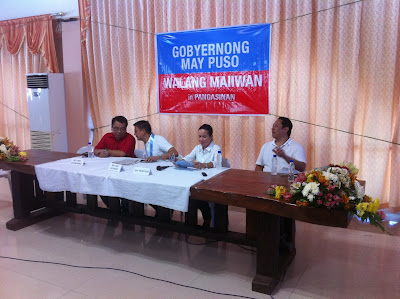 VIDEO where Philippines Presidential Bet Grace Poe acknowledges to political columnist Mortz Ortigoza's perennial proposal that she is open to amend the economic provision of the Constitution so more foreign investors come to the country and generate more jobs.

Senator Mary Grace Poe told reporters here that how can Filipinos find a job when there are fewer investors that could provide employment in the Philippines.
“Tama ang sinabi ninyo. Bakit? Walang namumuhunan sa atin sapagkat ang ating infrastructure. Paano sila makakarating sa lugar sa tamang oras kung walang utilities (like airport) (You hit the nail on its head on amendment. Why? No one wants to invest in the Philippines because of the lack of infrastructures. How can they punctually arrived on their destination when there are no facilities like airport),” she answered to the pose by Northern Watch how pathetic the country was when it got only U.S$ 6.2 billion 2014 foreign direct investment (FDI) while FDI poured $ 9.2 billion in Vietnam, $ 22.6 billion in Indonesia, $12.6 Thailand, and S67.5 billion in Singapore in the same year according to the United Nations Conference on Trade and Development (UNCTAD) had already eclipsed the country.
Elected candidates and those running for national office national office shy in giving their unequivocal statement that they are for the amendment of the constitution lest they be accused of perpetuating their stay in public office.
Poe cited why foreign investors were lukewarm to pour their capitals in the country.
“Una, ang taas ng ating personal and corporate taxes. So bakit tayo mamumuhunan dito ang dami mong babayaran na buwis, doon na tayo mamuhunan sa ibang bayan sa China at sa Vietnam (First, we have a prohibitive personal and corporate taxes. So why they would invest here where they would be burdened with heavy taxes when they could go to China or Vietnam that offer them better incentives),” she said.
She declared that she is open for the amendment of the xenophobic 60-40 percent economic provision of the Philippine Constitution so foreign investors can own 100 percent of the business capitals in the country and not be relegated to the 40 percent as minority stock owners.
“Ngayon, doon sa sinabi mong amendment, ako ay bukas (To your pose to amend the economic provision of the Constitution, I am open for it”), she said.