Lessons SAF could learn from the U.S Navy SEAL

The Mamasapano, Maguindano operation by the Special Action Force (SAF) was an almost botched raid. Its saving grace, thanks to the U.S Global Positioning Satellite (GPS), CIA's mole in the Moro Islamic Liberation Front, drone, and night vision goggles, was the finding, killing, and photo taking of Malaysian bomb maker, Zulkifli bin Hir alias Marwan, and cutting off one of his right fingers for DNA processing by the Americans.
Marwan, considered as consummate master bomber, has a $5 million (P235 million) bounty from the U.S State Department.
Likewise, the strategy employed in the Mamasapano (geez, I used to jog in the 1980s at the nearby Awang, Dinaig Airport with my military father) slaughters of the 44 British Army SAS (Special Air Service) inspired Filipinos elite SAF members could not be likened to the SEAL’s feat in Abbottabad, Pakistan where No. 1 Islamist terrorist Osama Bin Ladin perished in the double tapped bullets of the SEAL’s Heckler & Koch 416 assault rifle.
The U.S commando there were borne by two stealth UH-60 Black Hawks and two CH-47 Chinooks from  Jalalabad, Afghanistan to Pakistan while the 300 SAF traveled surreptitiously by foot through their sturdy boots to the target area.
The only stealth operation in the Philippines that until now remains unexposed was when the 1996 multi-billion pesos funds for the  AFP Modernization Act under Republic Act 7898  were pocketed by government officials during that time.
The monies used to purchase a squadron of F-16 Falcon's multi-role fighter jets, modern helicopters probably like the non-stealth UH-60 Black Hawks, frigates, tanks, others were lost after a huge chunk of the lands in Fort Bonifacio was sold by the government to the present owners of the burgeoning and bustling Global City in Taguig City. If you disagree what those scoundrels on the Bonifacio’s deal had done was stealth, then we can settle that it was a “steal” , son of a gun, in chutzpah.

SAF compared to SEAL’s Operation in Kunar Province, Afghanistan
A good comparison to a similar Mamasapano raid and the SEAL operation would be the SEAL Team 6 (yes, Virginia the same group that swooped at the lair of Bin Laden in Abbottabad, Pakistan) in the late 2000s in the inhospitable mountain of Kunar Province in Afghanistan.
In the book “No Easy Day: The Autobiography of a Navy SEAL” as told by Mark Owen, who was part of SEAL Team Six that killed Osama Bin Laden, he said when his squad was transported from their base in the U.S mainland by a Boeing C-17 Globe Master III to a military base in Germany, flown again by another transport jet to a U.S Bagram Air Base in Jalalabad, Afghanistan, and transported again by the CH-47 Chinook they called "school bus" to a fire base in Kunar Province,  they spent a day with the Army Rangers there by asking them the nuances of the inhospitable high mountain areas where the Taliban and Al Quida fighters were ensconced in buildings made of mud. Owen said the Islamist fighters there who live 7 kilometers away in rough and tall elevated mountains, have been ambushing and attacking the rangers.
Garbed in shabby camouflage  that don’t even pair with each others SEAL's dress and pants, where some of them don’t wear bullet proof plates, brandishing their German made Heckler & Koch MP7 with suppressors (or silencers, to the jeepney and construction workers who read this article), highly modified M79 40 mm grenade launchers they called “pirate gun”, Heckler & Koch 416 assault rifles with a ten-inch barrel and suppressors, M4A1 5.56 mm rifle (that looks like our "obsolete" Baby Armalite in the Philippines), others, the squad of long haired and unshaven SEAL Team - 6  avoid the road by melting away from the Ranger who did a regular patrol on the road at the wee hours of darkness, climbed by using their hands and feet the mountains slope, ridges, and cliff to locate the goat trails the drone took picture, walked the 7 kilometers, where the rangers told them they only reached half of it as they were  ambushed by the enemies, paced through the help of their night vision goggle the rough trail and  reach the target area.  By carefully peering at the hole, they shot to death the enemies with their automatic weapons suppressed by silencers. SEAL Snipers picked up, too, the rescuing guards nearby; while the four turbo prop powered AC-130 with its night vision goggled pilots emerged like a specter from somewhere and mowed  with their GE M134 Mini-guns and 20mm canons the reinforcements of the Taliban from the nearby areas.
SAF Lacks the Strategy and the Air Support given to the SEAL 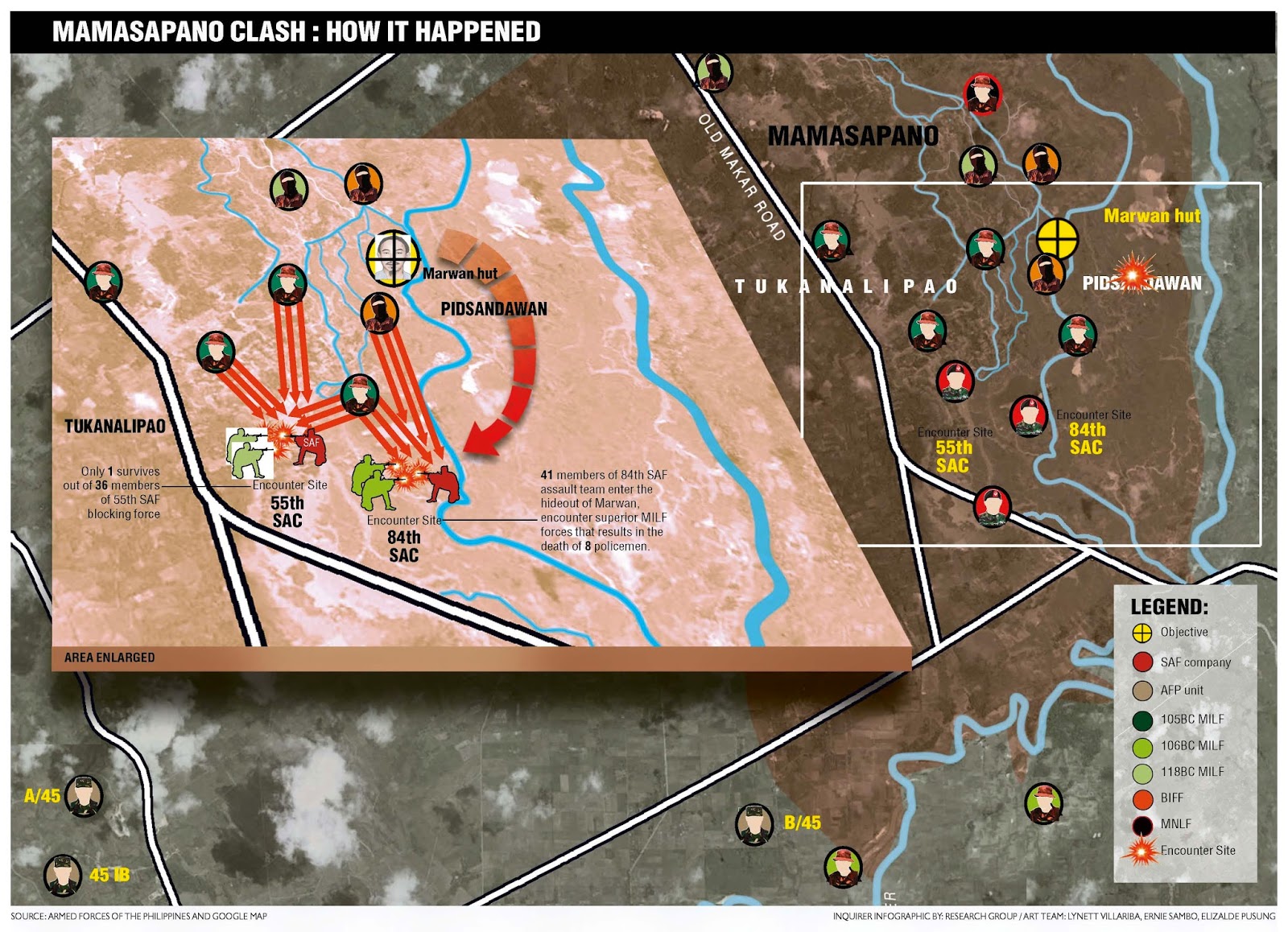 The 392 SAF probably carried by C-130 from Manila to General Santos, spent the day or days there.  Wielding with their automatic weapons and night vision goggle the two assault teams - 84th and 55th Special Action Command (SAC)  arrived at the two target areas at 10 Pm of Saturday, January 24.
The 78 selected commandos left the bulk of 314 men who waited at the national highway in Mamasapano town while the 55th, that acted as blocking force to protect the 84th, traveled by foot by another 3 kilometers to reach and strike Marwan, a U.S educated engineer, at his hut in the heart of the camp of the Bangsamoro Islamic Freedom Fighters (BIFF) in Barangay Pidsandawan. They killed him when he allegedly fired back (usual police alibi in killing the malefactor), apply the Sensitive Site Exploitation (SSE)  (just like what the SEAL had done at the house of Bin Laden and in Kunar Province by taking photos of the dead, gathered up weapons, collect thumb drives, computers, and papers to avoid being accused the following morning of killing innocent civilians)
As the  84th SAF triumphantly sent Short Messaging System or text to their superior in a base somewhere: “Mike 1 Bingo” (it means they killed the last few known surviving militants of his generation of al Qaida-inspired extremists who survived the U.S anti-terror crackdowns in Asia following the September 11, 2001 attacks in the U.S) and as they dashed off around 4 Am Sunday to the lone bridge and join the main force - the  314 men 45th SAC at the national highway - that waited for them with bated breath, thousands of Moro Islamic Liberation Front (MILF) and the BIFF in the nearby areas cornered the 84th and the 55th in Brgy. Tukanalipao and pounced on them with gusto.
When the 314 men of the 45th tried to rescue the two beleaguered SACs but withdrew because they were met by heavy gun fires from the thousands of MILF, BIFF, and armed civilians.
Thus the 11 hours running gun battle between the Muslim forces and the outnumbered 78 braved SAF

Unlike the Kunar experienced of the Navy SEAL who escaped and evaded the Taliban and Al-Quida fighters by wiggling unharmed through darkness with their night vision goggles where they saw the surroundings in pitch green, the SAF have been caught by sunlight and enemies bullets as they extracted themselves battling the enemies.
Unlike the Kunar experienced of the U.S commandos, no AC-130, Huey helicopter, or just a poor version of Captain Barbel from the Army 601st Brigade in the nearby Awang Airbase came and peppered the enemies to smithereens with machine guns.
It was learned later that despite the plea of the SAF for reinforcement there was a deafening silence on the part of the Army because Presidential Adviser on the Peace Process Teresita Deles told President Benigno Aquino III not to send the troops otherwise the peace process with the MILF would be undermined.
“Aquino’s inaction, the source said, was based on Deles’ advice. “They (Aquino and Deles) were so obsessed with the peace agreement, they want to save the Bangsamoro Basic Law as they believe it was the last piece for Aquino to earn the Nobel Peace Prize,” reported by the Daily Tribune.
Without military reinforcement, the MILF and BIFF relished picking up with their automatic weapons the outnumbered and under siege commandos who were cornered in the corn fields and near the river banks.
After the smokes settled 44 SAF fighters sprawled lifeless with their head broken and brains splattered on the ground as MILF and BIFF shot them on the heads with gusto, stole their weapons, wallets, uniforms,  and others and left a nation fuming to their president and the enemies.
Many of them have been asking for revenge and all-out war that I found another good opinion piece on my next column.
Successful Military Operation According to Mark Owen
The lesson the SAF could learn to SEAL-6 is quoted on the excerpt at page 137 of the No Easy Day’s book.
“On the helicopter back to Jalalabad, I finally had time to reflect on the mission. Sitting near the ramp in the dark, I was amazed that we were able to pull off an operation as dynamic as this one without taking any serious casualties. From the patrol up the mountain, to the assault, it was textbook raid incorporating all the lessons we hard learned from previous missions”.
Navy SEAL Owen poetically explained:
“Instead of flying in and fast- roping down, we snuck in quietly. Instead of blowing open all the doors, we crept in and caught the fighters off guard, Instead of yelling and crashing through the buildings, we used suppressors and kept the noise down when the possible”
He continued that they used the goat trails and traveled light (many of them did not strap their bodies with bullet proof plates as it was "light is fast") and they had beaten the Taliban guerrillas at their own game. Totally they cleared an objective with more than a dozen dead well-armed fighters without taking one casualty. The raid was proof that good planning and the use of stealth (not the steal in the AFP Modernization in 1996- MCO) was a lethal combination.
What an excellent observation from an experienced commando. I hope this article serves, too as a humbled future reference of another military or police operation.
(You can read my selected columns at http://mortzortigoza.blogspot.com and articles at Pangasinan News Aro. You can send comments too at totomortz@yahoo.com)